where the owner, their Royal Highnesses Prince and Princess Chumbhot of Nagara Svarga, decided to convert their private residence and built the traditional Thai houses in 1952. It is located on Sri Ayudhya Road, Bangkok on am area of 6 Rai. The museum contains their H.R.H Prince and Princess Chumbhot of Nagara Svarga's collection of antiquities, which has been passed down though successive generation. Moreover, Suan pakkad palace is a combination of fine arts and ancient artifacts from the era of H.R.H Prince Paribatra Sukhumbandhu, son of His Majesty King Chulalongkorn, or Rama V and Her Majesty Queen Sukhumala Marsri.

The museum itself consists of 4 groups of traditional Thai houses connected by raised walkway. Houses 5 to 8 are located along the west of the Palace. The Lacquer Pavilion stands on the south at the end of the main garden. The Ban-Chiang and Marsi Gallery are located in the Chumbhot-Pantip collection of prehistoric artifacts Center of Arts. 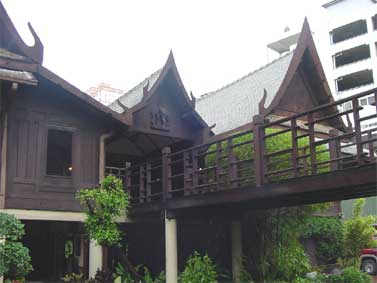 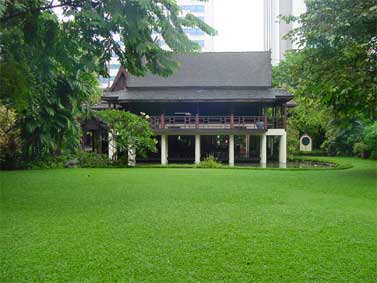 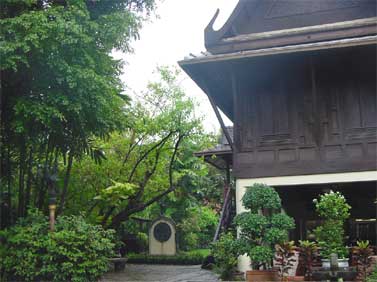 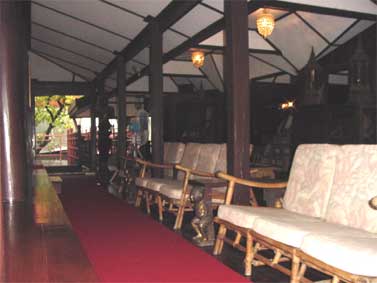 On the ground floor is "the Prince Paribatra Music Room". The collection of Thai musical instruments belonging to the late H.R.H Prince Paribatra, son of His Majesty King Chulalongkorn [Rama V], are displayed here, such as 6 big drums, alto xylophones, Thai 3-stringed fiddles, and gongs. Most of them are very old, rare pieces of craftsmanship. 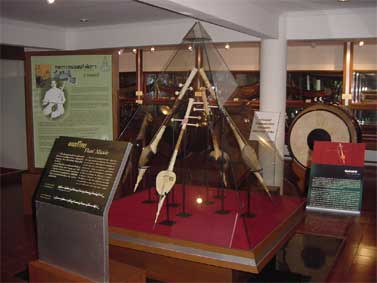 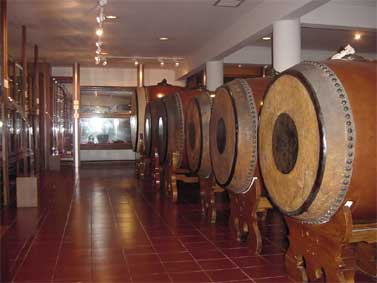 Upstairs, there are fine specimens of 3 Buddha images: one in the U-Tong style, another in the Gandharan style, and the last in the Burmese style. And there are Chinese porcelains of the Ming and Ching Dynasty period on the shelves in the middle of the room. Besides, there are Thai and foreign decorations in a cabinet at the north side of the room. There are several antique Thai weapons, such as shields, spears, swords, daggers and muskets. On the outer wall is displayed a painting on wood with scenes from the Buddha's life. 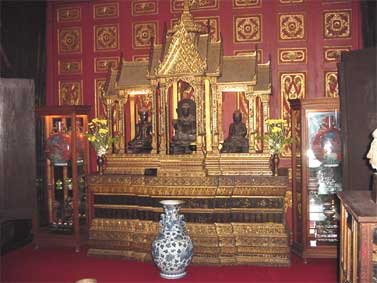 In the next room, there are several excellent stone sculptures of Khmer art. Among them is a torso of Uma [consort of Siva], found by Princess Chumbhot near The Cambodian border and dating from the 7th century, a standing stone sculpture of Ardhanarisvara, there is also a large painting on cloth from the early Bangkok period showing the Buddha descending from Tavatimsa Heaven.

House 2 displays some fine pieces of the family items belonging to Royal Highnesses Prince and Princess Chumbhot of Nagara Svarga. Among them are a howdah [elephant seat], a pair of elephant tusks, book cabinets which are painted in gold on black lacquer. On the well, are commemorative religious fans belonging to the Paribatra family.

In addition, there are pieces of traditional Thai artifacts of the Ratanakosin [Bangkok] period, such as food containers inlaid with mother-of-pearl and silver, ivory boxes for wax. On the bed there are 2 armrests, a traditional cape for a male member of the royal family and a sash for a princess. Besides, there are glassware and perfume bottles from many European counties.

Downstairs, there is a special room called "The Cave of Ali Baba" where Princess Chumbhot's extensive by Prince Chumbhot.

There are some interesting pieces of pentachromatic porcelain called "Bencharong" [five-colored ware], made in China but decorated with Thai designs, gold and silver nielloware pieces. In the middle of the room, there is an old Buddhist scripture.

At the east of the room, there is a palanquin and an umbrella for the rank of a prince, a model of Thai throne [Busabok]. The cabinet contains models of Thai musical instruments.

This house is sometimes used for dining on special occasions. One room in this house is private chapel, containing a large collection of Buddha images, such as a walking Buddha in the attitude of dispelling fear, in Sukhothai style [14th century], a Buddha in the attitude of subduing Mara [Evil] of Chiengsaen and U-tong style. On the wall, there are beautiful paintings on cloth depicting the Lord Buddha.

House 5 displays household utensils such as crystal, silverware, and porcelain that belonged to the late H.R.H Prince Paribatra and H.R.H prince Chumbhot of Nagara Svarga. There is also a collection of Thai coins and foreign currencies.

Thai ceramics from 14th and 15th century include Sawankaloke wares [Celadon], from the Sukhothai period and other from the kalong kiln in Chiengrai. Besides, There are green glazed friezes from a Burmese temple, plus some Khmer pottery, and clay figurines. Other objects include prehistoric flint tools and pottery from Kanchanaburi, as well as, ancient beads from Tak province.

House 7 is the Khon Museum. Khon means masked dance. It is the Thai traditional masked dance, which displays several art forms and the crafts in the context of the great Indian epic, "the Ramayana". Informer times, this dance was performed for royalty only. Besides, Khon masks, puppets, and clay figurines are displayed in this house. 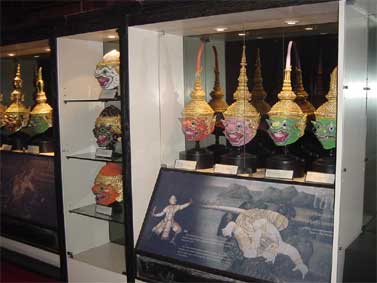 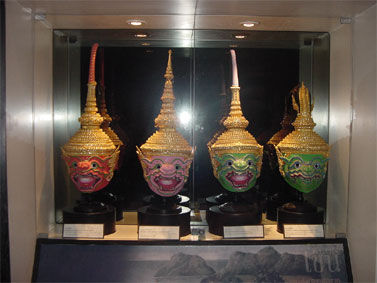 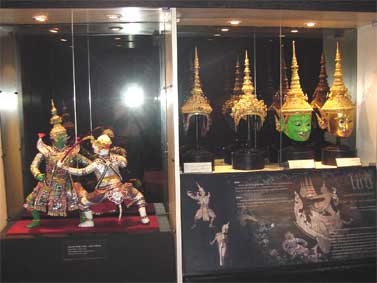 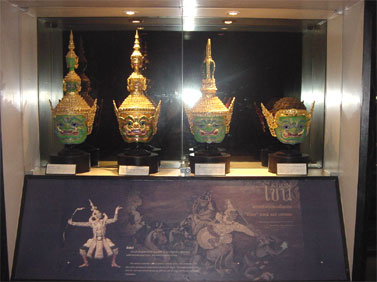 House 8 and Chumbhot-Pantip Center of Arts

House 8 and Chumbhot-Pantip Center of Arts [2nd -3rd floors] are devoted to the prehistoric arts of "Ban Chiang", in UdonThani province. The collection includes various pieces of painted pottery and cord-marked pottery. Most of them can be dated back 5,600-1,800 years ago. Besides, there are bronze objects, such as bracelets, necklaces, spearheads, arrowheads, glass beads, and remains. The main objective of the exhibition is to enhance the knowledge and understanding of the culture heritage of Ban Chiang community.

More minerals as well as collection of shells from Thailand and foreign countries, fish fossils, and geodes [lava stones] are displayed on the ground floor.

The Lacquer Pavilion
The Lacquer Pavilion, dating back to the 17th-18th century, stands in the main garden. Its former location was in the precincts of the Ban Kling Temple, on the Chao Praya River between Ayudhya and Bang Pa-in. The late Prince Chumbhot received permission from the abbot to move it to his palaces. He built other buildings for the temple in compensation. 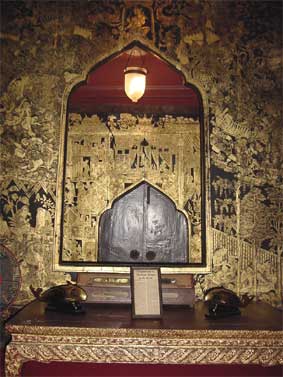 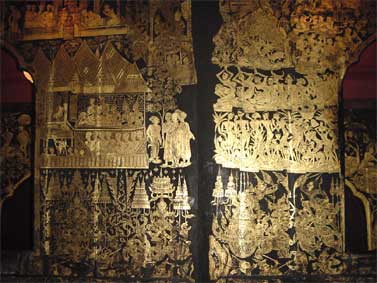 The outer walls are sculptured on wood and the inner walls are painted in gold on black lacquer. The paintings depict various events from the Lord Buddha above, along with others from the Hindu epic, Ramayara below, also the numerous scenes from daily Thai life, as well as some showing early foreign visitors to Ayudhya. It is the only one in Thailand so this makes the pavilion a very special Thai treasure, indeed.

Royal Barge named "Kao Kung Bayam"
The body of the barge is odorata hopea while the roof and sides of the living quarter are made of teak. This one passed down through successive generation from the era of the H.R.H Prince Paribatra Sukhumbandhu to Prince Chumbhot, ancestor of the Paribatra family, and it was used in Royal River processions of King Chulalongkorn. 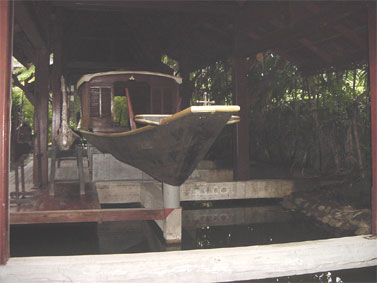 
The Marsi Gallery is in the 2nd floors of the Chumbhot-Pantip Center of Arts. It was named after H.R.H Princess Marsi Paribatra, the daughter of Prince and Princess Chumbhot of Nagara Svarga, with the intentions of preserving and promoting the art and culture by encouraging worthwhile activities and arts exhibitions all the year round. 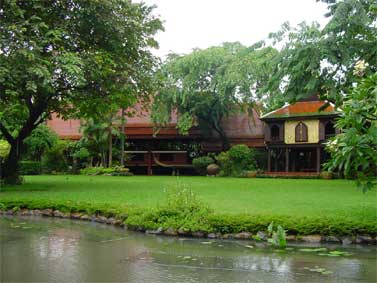 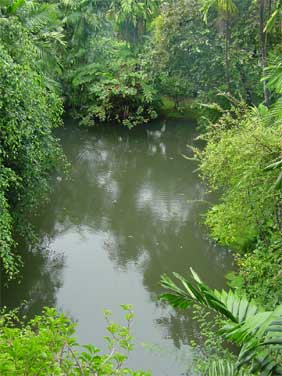 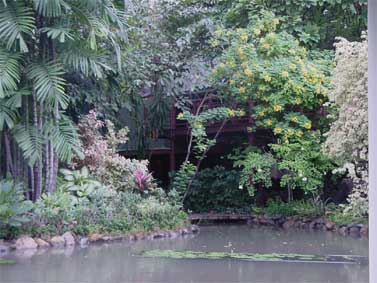