History
The Princes Mother Commemorative Park was built as HM the King Bhumibol Adulyadej issued a royal contemplation in 2536 B.E. with the purpose to conserve ancient buildings located near his mother's previous residence and turn those buildings as her commemorative museum. At the same time, he had a royal wish to develop the surrounding areas to be a public park for his people to relax, to restore their health and quality of life, to be a venue for organizing public activities or other seasonal celebrations. Also, the park can be a source for botanical study. Mr Daeng Nana and Mr Lek Nana, the land owner, dedicated four rais (approx. 1600 square meters) for the king's royal purpose.

The Princess Mother Commemorative Park is divided into 2 parts;
1. General Relaxing Area: This area was set as an open area for public, surrounded by numerous botanic, especially scented plants such as Cham-manad (a tree of the family Sapindaceae), Pud-Jeeb (the Indian cork tree, Millingtonia hortensis), and Lun Tom (the frangipani, Plumeria Acutifolia). The public can relax, organize public activities or seasonal celebrations. This section is also used as an exhibition area of arts and handcrafts, which is well blended with the natural environment. 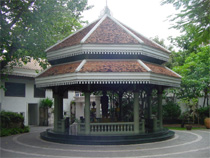 A house model: This is a model of the house that the Princess Mother used to reside during her childhood. The model represents a simple form of Thai style of living.

A museum building: The ancient building was restored and adapted to be a museum exhibiting the Princess Mother biography and her royal multifarious activities.
An academic building: Used as an exhibition area, reading area, and other creation activities.
The Sri Pipat (Pae Bun-nak) Art Center building: This is an ancient building adapted to be an art center, used for Thai art and cultural exhibitions all throughout the year.
A carved stone plate: To commemorate the Princess Mother, a large stone plate was carved presenting the Princess Mother's royal multifarious activities and the celebrating parade at the Wai Sa Mae Fah Luang ceremony. The stone plate is 8 meters long, 90 centimeters wide, and approximately 32 tons in weight. 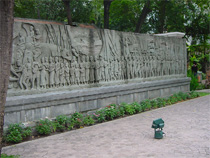 An office building: Another ancient building was restored and adapted to be an office for the park officials. Some parts of the building's remains are conserved as landscaping objects such as the entrance door and the ancient walls near the multi-purpose ground.
The Princess Mother Park is, therefore, compared as a royal memorial representing family's love and ties from His Majesty the King to his beloved mother. It is his people who get most benefits from this park. At this place, the public can study the Princess Mother's biography and a number of old trees such as Bo (Pipal tree), Chong Kho (Bauhinia), and Sai (Banyan tree) are also conserved. These trees naturally cover the areas among the ancient and contemporary buildings. The park is also a place that represents the harmony of the community that comprises Thai, Laotian, Chinese, and Indian of which are both Buddhism and Muslims who have been living together in peace for generations.

In case of a group visit, an official guide will be provided to present the park and activities calendar. Special activities are held occasionally, especially related to the commemorative events to the Princess Mother such as the date she passed away (July 18th), the national mother's Day (August 12th), the Princess Mother Birthday (Oct 21st), the King's Birthday (Dec 5th), and the National Children's day (the second Saturday of January).

Nearby attractions: The Kuan Uo Shrine (located on the bank of Chao Praya River, and there is a nearby port when visiting the park), Chao Por Sua shrine, Wat Anongarama, Wat Pitchaya Yatikarama, and Wat Prayoona Wongsawas.

A document issued at the news conference: " A celebration for the fifth year of the Princess Mother Commemorative Park".
Wednesday, October 9th, 2545 B.E.