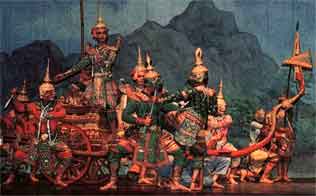 A performance of which acting and dancing are combined. All methods are identical to those of LAKHON(Acting). Only minor differences make KHON not to be called LAKHON.

Dancing in KHON is similar to dancing in LAKHON NAI(Royal act). More pattern of dancing with different actors and melody are adapted to avoid similarity among them.

Main characteristic of KHON is that the performers, have to wear masks except angle, leading male and female performers.

There are holes, for visibility, at eye position. They are decorated to perfectly portray protagonists' personalities such as YAK(demon), simian, teva (angel) and others. Masks are decorated with gold, lacquer, and paste jewels. Some people call them'Na Khon'

The story is proceeded by both rhythmic expressions called 'Pak' and rhythmic dialogue. The Pak's words are Karb Yani (a verse that consists of 11 syllables) and Karb Chabang (a verse that consists of 16 syllables). The dialogues and songs for KHON actors are all recited and sung by, so called, a Cheracha man ( a person who speaks out the dialogues for the performers).

for KHON and LAKHON NAI are identical. The only distinctive item is, naturally, the mask. The masks are in various designs depending on characters and roles. The dress for a leading actor and demon has two colours distinguishing a waistcoat and sleeves. The waistcoat, by this token, represents Armour. For the simian roles, coats and sleeves are designed with pattern of lines rounded in clockwise direction representing hairs. For the demons, there must be a short piece of cloth hanging at the back hem.

The repertoire for KHON is drawn from Ramakien (Ramayana).

The KHON performances are categorized as described below.

Khon Klang Planeg is the open-air mask play. Assuming one side of the area to be the city of Lonka, whereas the other side as Phra Ram's royal quarter, fenced as a imitative camp. There is a 2 m high platform built for a gamelan at each side of stage area. If there is a battle scene at the central zone, the nearer gamelan is responsible to play the music. Khon Klang Plaeng is proceded by recitation and dialogues only.

Khon Nung rao is performed on the stage at the height of eyesight. The floor is in rectangle shape. The stage is flanked by 3 parts of curtain, which is painted a swell scene of mountain and forests. At outside, on the right of the stage, is a 3 m long with swell paintings of fences and royal quarter of Phra Ram. On the left is a swell painting of a palace and castles, assumed to be the city of Lonka. Two main entrances separating central zone scene and outside scenes. In front of the scene, 1.5 m apart, there is a wooden-tube rail, which is supported by a 60 cm long pole, placed towards the scene. At each end of the stage, there is a 1 m high platform for a gamelan.

The wooden-tube rail serves as seating. When sitting and facing left, the left leg crosses the rail. Do the same when facing right. Phra Ram and his followers sit on the right. Phra Ram himself sits on the far right end of the rail, facing left. His followers orderly sit towards the rail's mid point. At Lonka side (for the demon) is on the left of the rail. The leader, facing right, sits on the left end of the rail. The followers sit before him, facing left. The non-seated performance can be displayed at all area of the stage. The performance, as in Khon Klang Plaeng, is proceeded by recitation and dialogues only.

Forms of dancing are perfectly performed as innovated in the traditional Master of the dance. The performers have to adapt their steps and poses to the recitations and songs of the chorus. The orchestras (gamelan) alternately perform the music from the beginning (Hom rong) to the end of the performance.

Khon rong Nai is a mixture of Khon and Lakhon Nai. They are both in door performance. A single curtain is used as a scene. There are two exits. A bench is placed near each of them. A gamelan may be, depending on the setting, at the back of each bench or slightly towards the stage.

The performance is proceeded by recitation, dialogue and songs, which are performed by recitators, dialogue man (Cheracha man) and choruses.

Similary begin as Lakhon Nai, that is, the leading actor sits on the bench, then carry on his/her dialogue or song as the story proceeds, either as Khon or Lakhon. For example;

An important Khon instrument which is distinctive from Lakhon's, is a royal chariot and a state umbrella, held by an attendant over the leading actor.

It has become the preferred habit for those taking leading roles as well as roles of celestial being not to wear masks since Khon joined with Lakhon Nai, which is called Khon Rong Nai.

Khon Na Chor (mask-play before the scene) is a performance that is identical to Khon Rong Nai. It is only a variety in which the presentation takes place.

The theatre for Khon Na Chor is an adapted version of that for Nung Yai (big screen). Two entrances are added, a bamboo curtain under the screen makes the Khon actor visible for a chorus. The screens outside both entrances are painted; one side is a royal court for Phra Ram, the other is Lon Ka palaces and castles. One bench is placed near each door. The orchestra used to be in front of the choruses who is at the back of the stage.

All types of Khon, from khon klang plaeng to Khon na Chor, has a special musical instrument called 'Krong'. Krong is made from big bamboo stems with 3-4 meters long, supported at both ends, 8 centimeters above the floor. 4-5 persons sit in line, holding Krub (a wooden rhythm instrument) in both hands, make the rhythms. Only mirthful songs such as Krao Nok, Krao Nai, or Cherd are performed at the back of the screen. Khon peformers have no participation in the rhythm produced.