The Thai Labour Museum came into existence because labour leaders, NGO representatives, scholars and historians gathering at the Friedrich Ebert Stiftung viewed a museum to be established in dedication of Thailand's missing chapter of the history. It was agreed the museum would serve as an information centre and a showcase of the Thai labour movement.

A one-storied building, which was once home to railway police station and the Railway Labour Union Headquarters, was turned into the museum guarded by a stone sculpture of male and female workers pushing forward with all their might the wheel of history. 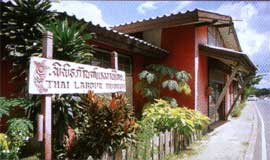 Room no. 1 is devoted to illustrating the miserable life of the Thai slaves. On display are old utensils and accounts of the slave workers who were backbone of the feudal system.

Room no. 2 gives visitors an insight into the Thai workers' involvement in the modernisation of the Kingdom during the reign of King Rama V.

Room no. 3 shows the plight of Thai lobour prior to 1932 Political Reform. Anumber of documents show workers had already attempted to unite in the form of associations. A copy of leaflet distributed by workers demanding fair treatment and a copy of a labour newspaper, the first newspaper that spoke for the working people, provide firsthand information about the labour movement during this period.

Room no. 4 displays the labour movement after the Political Reform in 1932 up to the coup d'etat by Field Marshal Sarit Thanarat

Room no. 5 showcases photographs and accounts of the fate of labour leaders under the rule of Field Marshal Sarit. At that time, the labour movement was regarded as a threat to economic development and ruination of investment climate.

Room no. 6 shows the records on the recent Thai labour movement. On view are accounts of the rally for the Social Security Act, the rally for 90-day maternity leave and work of Thanong Phoarn, a union leader who challenged the dictatorial National Peace keeping council and mysteriously disappeard in 1991. In addition, there is a participation of the workers in the fight for democracy in may 1992. In one corner of the room stands a showcase of remains from the burnt down Kader factory where hundreds of workers died in a fire, caused by the greed for profit.

The room with bars is turned into the Prof Nikom Chandravitoon Library. He was a former directed scholar. The library offers a good collection of documents, books and research works on Thai labour and is open to the public. 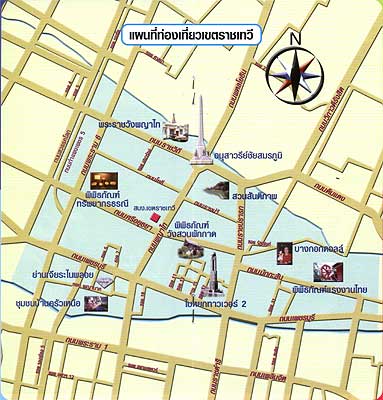